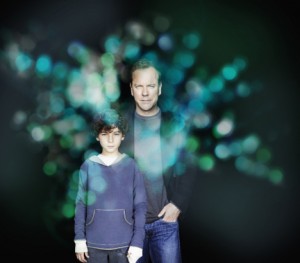 TOUCH: Kiefer Sutherland (R) returns to FOX as Martin Bohm, a widower and single father, haunted by an inability to connect to his mute 11-year-old son (David Mazouz, L). But everything changes when he discovers that his son possesses the gift of staggering genius – the ability to see things that no one else can and the patterns that connect seemingly unrelated events. TOUCH debuts with a special preview Wednesday, Jan. 25 (9:00-10:00 PM ET/PT), then makes its series premiere Monday, March 19 (9:00-10:07 PM ET/PT) on FOX. ©2011 Fox Broadcasting Co. Cr: Brian Bowen Smith/FOX