Modern Family, same as most TV shows is doing its special Halloween episode, and tonight was time to the episode called Open House of Horrors in which since Claire has overdone it in Halloweens past and the neighbors definitely don’t share her enthusiasm, so this year she’s being forced to tone it down and keep it “kid-friendly,” and Phil has an idea to hold an open house on Halloween night. Meanwhile, Mitch and Cam host a costume party while contending with Lily wondering who her real mom is, and Gloria’s pregnancy hormones are on overdrive, making her even more hotheaded than usual.

(This is the episode that follows Phil Dunphy´s Philsosophy book.)

Luke: Why are there giant lollypops in the front yard, and why do they taste so bad?

Claire: Last year I took things to a whole new level… aparently it was scary for some kids… and one adult.

Phil: I don´t care what anybody says, you did not give that man a heart attack.
Clair: Thank you.
Phil: I mean, you are not even scary.

Claire: What do you mean I´m not even scary? I literally almost scared the life out of a man.
Phil: You literally scared a little saliva and a little urine out of him. That happens to me every time I see a monkey wearing people clothes.

Phil: It was an overkill. You are the kind of person who could be twice as scary if you didn´t wear any makeup.

Cam: Why is she so obssessed with princesses?
Mitchell: Like we weren´t at her age

Gloria: I am not a hothead, I am Colombian. We get excited. My country is covered in coffee.
Manny: Just like the Starbucks girl when she got your order wrong?

Manny: How I pray for this umbrella to have Mary Poppins´powers.
Luke: You cannhope he didn´t hear that.

Mitchell: I´m hearing rumours that you keep flashing to our guests
Cam: Not in a perverted way. I just want people to see my body under this stupid costume.
Mitchell: That´s what actual flashers say.

Phil: I kinda just took it out on a Harry Potter. Seriously though, a Gryffindor letting his mom carry his Quidditch broom? How Hufflepuff is that?

Phil: Claire, this is serious, I have a job. Not that you don´t. You work 24/7 and you don´t get half the appreciation you deserve. Can we talk about this later.

Cam: Jay, have you seen my new Tattoo?

Phil: So this remote you know how to use?

What did you think about Modern Family Halloween episode Open House of Horror? Let me know in the comments section. Also, follow me on Twitter for more Modern Family Quotes and Memes. 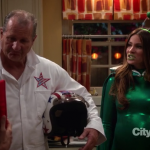 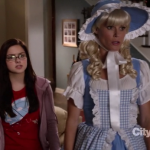 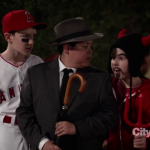