Best Quotes and Moments from Psych S07E13 Nip and Suck It

We are nearing the end of season seven of Psych, in what has been yet another awesome display of great TV. With still another episode before season finale, last night an episode called Nip and Suck it aired, in which After a woman dies from what appears to be a plastic surgery mishap, Shawn (James Roday) and Gus (Dulé Hill) believe the killer is her doctor, a woman who happens to be an old flame of Henry’s. Not only that, but also, Gus gets convinced to have something done on his face.

A Title reference to Nip Tuck

Henry´s ringtone of I´m Mr Booty Man in a remixed version was hilarious.

Henry starts the episode all Psychic Detective himself finding a dead girl´s body.

Shawn: Not a lot of hair left to join that celebration.
Gus: Your dad realizes he´s retired, right?
Shawn: Yeah, but he had a tough year… he got shot… well, I guess that´s it.

Henry: Guster, no half assing here

Woody: What we have here is a woman.

Woody: This is Dr Joan Diamonds´work. I´d know it anywhere. I saw her speak at a symposium of forensic artists. She also appeared on The Love Boat, back when she was a Dallas Cowboys Cheerleader.

Woody: There was enough botulism bacteria here to dewrinkle all the Sharpeis in China.

Doctor´s Assistant: Doctor is ready to see you.
Shawn: Oh good, maybe she can make me look both youthful and astonished… or Asian.

Shawn: Get this, we just found out a woman who still has the hots for Val Kilmer.
Jules: Really?

Henry: I don´t even wanna know what you think that means

Henry: That´s a really lame movie of the week you are telling Shawn.

Henry: So, you know everyhting, do you?
Shawn: No, I don’t know everything, just everything you know and then some, plus 3.
Henry: Well, then, good luck to you.

Gus: I better get the girl.

Shawn: I´m Psychic Detective Shawn Spencer and this is my borther Darrell and my other brother Darrell.

Gus: My back feels better. Weird.
Shawn: What you are doing is weird.

Shawn: Your earlobes are fine, it´s your relationship that needs a lift.

Henry: What took you so long, Sonny Boy?

Gus: Great, we just tailed your dad to his afternoon nap.

Henry with his “Suck It” carton board was epic!

Shawn: What took you so long Daddy Boy?

Gus: You just got dusted by your dad.

Henry: Real Cops always rely on instinct Shawn. It comes with thirty years of detective work.
Shawn: Yeah, well, Real Fake Psychics rely on stuff that is a little more substantial, like whims and whiffle swings, and that´s precisely what I´m gonna use to prove you wrong.
Henry: Good luck with that.

Henry: I´m all about touching, respectfully

Lassiter: The bad news is that because doctor Diamond took your phone, we don´t have the picture of the vilest thing that´s making Guster look like Lil Wayne Newton.

Shawn: Come on Pop, don´t be so hard on yourself. So you took some asswhooping.

Shawn: Am I really that predictable?

Shawn: Uh-oh, that was one unhappy ending.

Shawn: Lassie, I´m not so bullish on your bullseye. You need to uncross your crossers.
Lassiter: Land the plane, Shawn!

Shawn: Excuse me, Lassie, you try to do a breakdown with your father!

Shawn: Gus does the African American version of Face Off with himself.

Gus: Shawn, Rachel wants to talk. This is it. The break up has begun. These are delicious beacons of heartbreak, Shawn. They´re breakup cookies.

The pineapples are in the cookies Rachel sent to Gus.

NICKNAMES ON PSYCH S07E13 nip and suck it

What did you think about Psych Nip and Suck It? Tell me in the comments section. Also, follow me on Twitter or visit my Pinterest FanBoard for more Psych scoop. 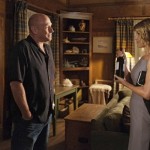 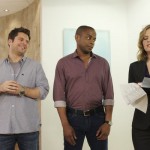 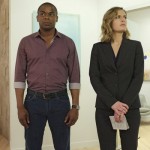 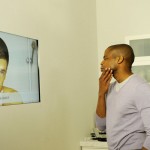 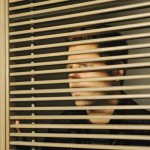 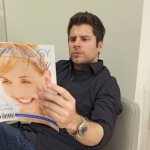 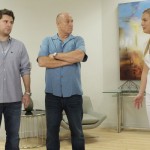 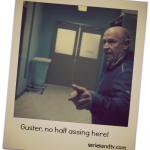 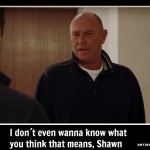 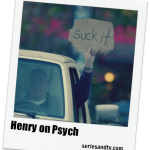 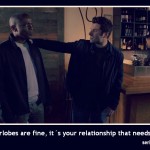 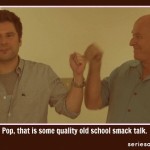