The best quotes and gags from The IT Crowd season four I love my job! Having to watch The IT Crowd all over again from scratch as my week assignment? Check. Laughed all day? Check. So now, sharing my discoveries: The best quotes and gags from the fourth season of It Crowd with all of you. Check.

SOME OF THE BEST QUOTES FROM THE IT CROWD fourth SEASOn

Moss: Kind of a dungeons and dragons thing
Jen: It has something to do with sex?
Moss: Far from it, Jen.

Jen: Moss, I want to stop listening to this.
Moss: I completely understand.

Jen: She´s photoshopped out of all of them?
Moss: Yeah, it´s like someone broke up with Stalin.

Jen: You do seem better than yesterday.

Moss: Oh shut up Dumpo, the elephant who got dumped.

Jen: That´s the shithead of the year award.

Moss: Women. What are they? Who knows? Can´t live with them. Can´t find them sometimes. What´s going on in their little heads? Don´t ask me, I´m not a flippin´women´s
psychiatrist. But I´ve learned one or two things from conversations with my mother.
Roy: No Moss, please, don´t go any further. Just stop right there. You are no good at
this kind of things, Moss. You´ll just make it worse.

Jen: I got the job. Douglas gave me the job so I stopped talking.

Roy: You are the new Fredo.

Roy: Fredo, in the film, he was sort of a pimp.
Moss: No, he took the ring to Mordor.
Roy: Fredo was a pimp.

Douglas: Don´t listen to her, the bitch is crazy.

Moss: Men hey, what are the like with their boardy talk and roughhousing and their
wandering hands and breath in the morning. I´d like to see them have the babies.
Jen: What are you getting at, Moss?

Roy: Just go with it. It will end.

Roy: I´m not feeling it tonight.
Jen: Then fake it sweetheart.

Moss: I sense a sadness in you.

Roy: Stop cleaning my windows, I want to go to the toilet.

Roy: He was very persuasive, I guess.

Moss: My mom always says: “Never open the door”. An unopened door is a happy door, so we never answer ours when someone knocks.
Jen: What if it´s good news?
Moss: This is London Jen, it´s not like there´s someone with cake. Unless that cake is of dog poo and knives.

Jen: Does it not outrage you, Roy, as a member of this IT department that I, your
head, is not being represented at the Monday, Friday?
Roy: Couldn´t give a shit.

Jen: You shouldn´t have agreed to mind it for him in the first place.
Roy: Oh thanks Jen, that´s really helpful, that´s really good advice, that´s exactly
what I´ll do in the past, when it happens again, last week.

Jen: Roy, will you listen to me?
Roy: I don´t have to listen to you. I´m not married to you.

Jen: What´s the problem with being a window cleaner? It´s a noble profession.
Roy: If your last job was cleaning balls.

Jen: I have my dignity… no just wait, that might work.

Moss: I came here to drink milk and kick ass… and I just finished my milk.

Moss: Jen´s going out with a geek!

Roy: My arse is not a canvas.

Douglas: Do you have to go to the toilet? Because you are doing the wee wee walk.

Douglas: Congratulations on getting an iPhone.

Jen: She had a baby like yesterday and she is already invading Spain.

Roy: You don´t like it?
Moss: It´s the worst thing ever. You look like a tall girl.

Roy: You are one of those women who don´t like women.

Jen: Are you alright Roy?
Moss: Is it the jacket? Because it should be.

Moss: I could be getting an iPhone without giving any money to Apple. I would be living
the dream.

Moss: How did a brother end up here?

Jen: Don´t take your bad career decisions out on the users.

Roy: It´s infected. Is this was a human being, I´d shoot it in the face.

Jen: I´m not a stupid geeky geek
Roy: You don´t have to be a geek to know that
Jen: Yes you do, because as soon as you know something like that, it pushes out something important, and before you know it you are painting little figurines from Lord of The Rings.

Moss: I thought you hated parties.
Roy: I like parties. It´s balloons I don´t like.
Jen: You don´t like balloons?
Roy: Oh, don´t talk to me about balloons.
Jen: Oh, why?
Roy: Balloons explode, Jen. They explode suddenly and unexpectedly. They´re filled with the capacity to give me a little fright, and I find that unbearable.

Moss: We´re going to get in trouble.
Roy: Getting in trouble is something that happens to children. You´re a grown man.

Moss: I´m excited Roy, this is like taking the blue pill in the Matrix.

Roy: What´s wrong with you? Who are you?
Moss: I don´t know anymore.

Douglas: Our invisible dessertes have arrived.

Douglas: I forgot you could do that.

Jen: Have you told her yet?
Douglas: Kind of, I changed my Friendface status from “married” to “it´s complicated”.
Jen: That´s not the same as telling her, Mr Reynholm.

Moss: I don´t have good experiences with the legal system.
Jen: How come?
Moss: When I was eleven I broke a patio window and my mom sued me.
Jen: She sued you?
Moss: Yeah, to teach me a lesson. She´s always been an aggresive litigator.

Richmond: That was more of a phrase than anything. 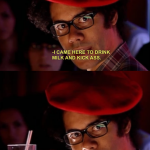 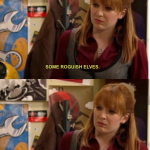 How I feel when someone explains role playing games to me 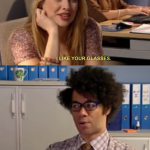 Never noticed when a girl flirted 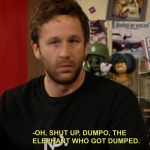 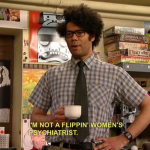 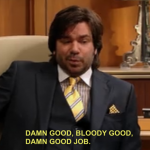 That´s how I feel when I finish an assignment 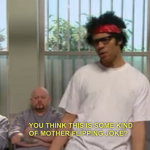 Yup, I do, Moss, actually