This season so far has been amazing in Psych, as we already saw the episode 100, Gus trying to babysit, we saw Lassiter getting married, and even Shawn and Jules breaking up.

And now, this week, in the ninth episode of the season, the same week in which we learned that season eight of Psych has been extended for five more episodes, bringing the order up to thirteen from the initial eight, we get to see another great episode, in which Juliet O´Hara kicks ass! The episode called Juliet wearsthe Pantsuit, where Shawn and Woody bond, while Juliet spends time with a person who Shawn suspects is a killer.

Shawn: Something that spelled Fashion!
Jules: It´s a bit literal.

Shawn: I propose joint custody on the Froot Loops and that I don´t move out.

Shawn: There are a lot of guys that blew it way worse than I did and got to keep their women, like Bill Clinton.

Jules: She answered my Craiglist add
Shawn: Jules, only Psychos answer ads on Craiglist! You might as well have posted it on murdermethisinstant.com

Shawn: I´m not just gonna give up on us, alright?

Shawn: Come on man, let me stay with you. It´s gonna be like old times.

Shawn: So what? You just get to play pretend family with an indian princess while I´m stuck living on the streets like Jamie Foxx with an old cello.
Gus: Yes.

Gus: So what´s the plan?
Shawn: Plan´s to win Jules back, obviously
Gus: Good luck Shawn
Jules: It´s not gonna work Shawn
Shawn: Oh come on Jules, at least tell me I´m better company than Kimberly. She´s like Buffalo Bill with a red bow on top of her

Shawn: Jules, first I woud like to sincerely apologize for everything I said about Kimberly… sincerely. And second, I know why she didn´t get back to you.

Woody: It´s a new look I´m trying. I call it snofur
Shawn: Snofur?
Woody: Business on the left, party on the right. It´s like a mullet on the footwear.
Gus: I´m calling it crazy.

Shawn: Let me stay in the fumigation tent
Gus: Don´t be ridiculous Shawn

Woody: You can take care of me Shawn.

Jules: I love that Locket, looks like something out of an Emily Brönte book.

Shawn: Even I´m jealous of me? Schizoid!

Gus: You do realize you’re the last person on earth who says ‘the hots’ with zero irony in your voice, right?
Shawn: Alright, she has the hobba hobbas.

Gus: Whatevs, if I don´t get some electrolites into my system soon, I´m gonna go into renal failure.

Shawn: This is my partner. Blue Ivy Carter
Gus: Ahhh No Pictures.

Shawn: I can see you are a master at your craft.

Shawn: Well now I know where Kimberly was killed.

Lassiter: If my instincts are as strong as my belief that climate change is a hoax, it will be Kimberly’s.

Gus: That theory is whacked, if that´s true, then she´s a hall of famer nutjob.

Shawn: Feast your eyes on your evil twin.

Jules: She has a key to my house
Shawn: Our House… in the middle of our street.

Shawn: Promise me you´ll be extra careful.
Jules: I promise.

Woody: Come on roomy, fall on the grenade so I can go on the other one.
Shawn: Which one is the grenade?

Shawn: Woody, as enticing as this offer is, I’m not Tom Sizemore.

Lassiter: What a pathetic juke joint. This is where desperate lonely people come to die, one scratchy spend of whisky at a time.

Shawn: As the Steven Weber to your Bridget Fonda, I am 60 seconds from taking a stiletto to the eyeball.
Gus: Everyone knows that’s the psycho death blow!

Gus: One of my favorite bathroom reads is Areas and ZIPs: Codes for Code Lovers.
Dave the Landlord: God, I thought I was lonely.

Shawn: Dead people only talk on the phone in movies.
Gus: Like Cuba Gooding Jr in Radio.
Shawn: No, that´s not right, that´s not what that film is about.
Gus: Are you sure?
Shawn: No, Radio was about a mentally challenged character who wanted to play football.

Shawn: Guys this is no longer Single White Female, this is Sleeping with the Enemy.

Lassiter: How on earth did you ever get a girlfriend.

Shawn: Is it just me or I´m sensing some of our old chemistry?
Jules: It´s just you.
Shawn: Ok.

Gus: Oh my God it´s 555-0135
Shawn: How do you remember our phone number?
Gus: It´s part of the Fibonacci sequence. how do you not remember that?
Shawn: What did you just say to me?
Gus: Fibonacci.
Shawn: You take that back!

Shawn: Hey, I think that you are amazing, and i mean it in a completely platonic unless you don´t want it to be platonic cause I can make it happen right now sort of way. Seriously though, you kicked the crap out of that guy. I mean, that was old school epic Cobra Khai “Do you have a problem with that Mr Lawrence Dojo” style.

What did you think about Psych Right Turn or Left for Dead? Tell me in the comments section. Also, follow me on Twitter for more Psych scoop. 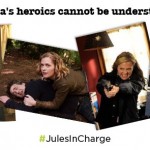 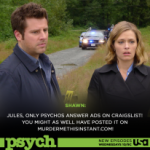 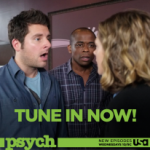 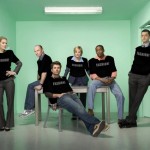 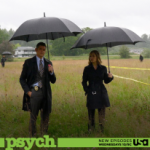 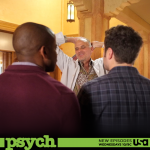